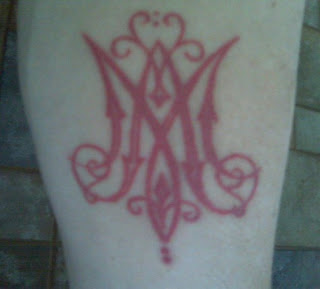 (överlåtelsebön 2)
Posted by Maria at 2:32 PM No comments:

I have heard that this is a Norwegian town, and a Norwegian congregation. That's a bit on the funny side, since I am Swedish, and we Swedes, well, we think Norwegians are funny. Cute, and a bit silly.
Not, you know, the sharpest tools in the shed, so to say.

Where I come from, in the extreme south in Sweden, we live right across Öresund from Denmark. Constantly exposed to and used to the strangeness of Danes and Danish, Norwegians become even funnier. We tell stories about Norwegians. I thought I'd share one with you all:
A Swede, a Dane and a Norwegain decided to compete in swimming. They found a good place, right across the sound from Denmark where the sound is only about a mile wide, and agreed to swim across. Whoever did it the fastest would be declared the winner.
The Dane got in first. He swam for his life, thinking of all the good Danish beer that awaited him on the other side. He was fast, really fast, and when he waded ashore, he was sure he would be the winner.
The Swede was up next. He, too, thought of all the good Danish beer on the other side, and swam faster than ever before. When he saw the pier on the Danish side, he put in some extra effort and managed to finish just a minute ahead of the Dane.
The two men sat on the pier and waited for the Norwegian. But they waited and waited and waited, and finally they became worried for their friend and got in a boat back to Sweden to see what had happened. Back on the Swedish side of the sound they found their friend in a deck chair, eating icecream in the sun.
”What happened?” they cried. ”We were waiting for you!”
The Norwegian answered: ”Well, I started swimming and the water was kind of choppy and rough and I got tired. I almost made it over, but when I saw that pier, and the two of you waiting for me, I realized I was too tired, so I turned and swam back.”

Yeah, I know. It's a silly story. I have heard the Norwegians tell these kind of stories about us Swedes, which is funny, since they are obviously about them...

Anyway. The animosity between the Nordic peoples has gone on for centuries. We used to fight each other, and the part where I live used to be Danish. Norway was Swedish until the start of the 19th century, and before that it was Danish for a very long time. These days, we are not so much enemies as siblings, constantly ribbing and teasing each other. In very many ways, we are extremely alike. We almost speak the same language, we almost look the same, we almost eat the same food. We are Lutheran, and secularized, and have strong welfare states. But we can't help teasing each other and sometimes even looking down on each other.

The disturbing thing here for me, as a Swede, is that Jesus is Norwegian.

You didn't know that, did you? I bet you thought he was from Galilee, right?

The thing is, to the people of Judaea, the people of Galilee was a little bit like the Norwegians to the Swedes. Not the brightest, you know. A little less cultured. Some weird customs, a bit on the strange side, even though the language was almost like the Arameic the Judaeans spoke. Ate a lot of fish. And this semi-barbaric, despised people was the one God chose for bringing up Jesus.
Had it been today, there are surely other peoples that would have been chosen. Maybe for us, in Sweden, it would indeed have been Norwegians, but much more likely is that Swedes of African or Roma descent could have been the ones. I am sure all of you know who are the most despised and questioned people in your country and your local community. And that is where Jesus would be found. Because if there is one thing we can be sure of regarding Jesus, it is that he does not chose to live with the popular crowd. He chooses to walk right next to the sad ones. Right next to the despised and oppressed and marginalized. And this gets a little bit tricky when it's us who are the modern day Judaean self-righteous Pharisees, right? Jesus is with the others, the annoying, disruptive, un-orderly ones.

But Jesus would not be Jesus if all was lost. God would not be God if there was but one chance to get it right. And we would not be Lutherans if we could not embrance change, and our own identity as both sinners and saints.

Jesus walks with us too. He came to Zacchaeus and to the Roman officer. He talked to prostitutes and lepers. He accepted a drink from a woman of another faith, and healed the daughter of another. If we truly believe that he dies for all people, then that means all. Norwegians too. And the only thing that we need to do, he says himself, is to believe in him.

About as easy as swimming back across the sound when you're so tired you don't think you can make another stroke.

To simply declare that one believes is easy enough, but that belief has to be hardened and proven true. We cannot and may not treat others badly. If we truly believe Jesus dies for all, that means he dies for them too. That means, even worse, that he is among the people that we treat badly.

Jesus is never ever on our side when we oppress and despise other human beings.

There is a richness in our diversity, a God-given opportunity for us all to cherish all aspects of life and humanity. We are all one body in Christ. We have different tasks, but to us all, without exceptions, is given the task to build each other up in love until everyone has reached the kind of spiritual maturity Paul speaks about in his letter to the Ephesians. A humble acceptance of not being at the center of the universe, of not being the one everything else measures up to. An acceptance of not understanding everything, but trusting in God's love. Bearing with each other in love, and knowing, deep in our hearts, that God is above all, through all, and in all. Even Norwegians.
Because Jesus is Norwegian. He is Swedish and Somali. He walks the mountain paths of the Rocky Mountains, and the steep hills in Afghanistan. He speaks Spanish and Korean.
One God, one baptism, one cup spilled for all. And one bread with life for all.
Posted by Maria at 11:40 PM No comments:

Do not judge others just because they sin differently than you.